Towards the intelligent crane 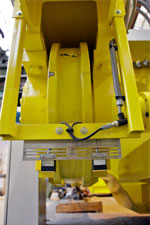 This system detects if the bogie's wheel's position is not centred with respect to the rail, an indication that the crane is moving laterally.

In these cases the electronic control system sets up a correction value based on the movement and puts each motor in a different revolution velocity until both bogies move in a synchronised, parallel way.

Its advantages are less wear in the wheels and that it prevents the crane from getting stuck. 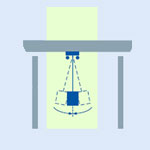 If that were the case, using the frecuency inverter the system corrects the crane's as well as the crab's speed (direction, translation or turn), balancing out the load's inertia and achieving a homogeneous movement.

Its advantages are a calculation of the best trajectory, a safer transport and a more precise positioning of the load. 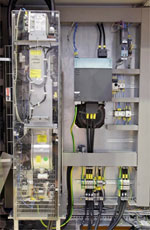 This systems recovers kinetic energy from the crane's braking processes and transforms it into electric energy.

In these cases, instead of dissipating the kinetic energy via some resistors, it is sent to the modular regenerative frequency inverter, which sends it back to the system as electric energy.

Its main advantage is the reduction of costs in electricy, since the reused energy is not taken from the facility's electric supply.

These lights equipped with LED lights last for longer and require less maintenance and substitution than the previous models. Also, they offer a better illumination at a lower cost.

LOOKING FOR A COMPANY AND SOLUTION THAT EXCEEDS YOUR EXPECTATIONS? Request a quote